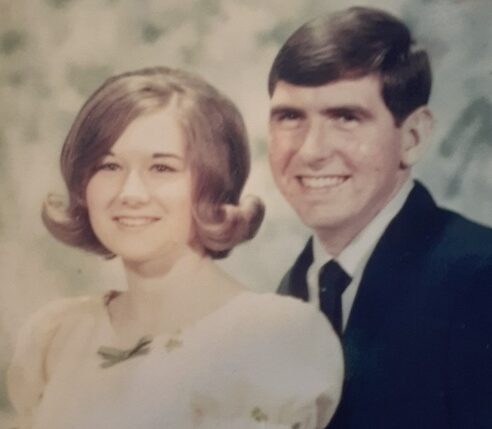 Clay was born on Easter Sunday, March 28, 1948, in Kingsport, TN. On December 20, 1968, he married the love of his life Brenda Hamblen-Hutson. During their marriage, they were blessed with two beautiful daughters, Sherry Ann Hutson and Anita Hutson-Jantz. Though Clay loved his family boundlessly, he also enjoyed spending downtime at the beach and like many of us- believed in the UT volunteers!

Mr. Clay Hutson was a proud alumnus of Church Hill High School graduating in 1966. He then continued his education graduating from East Tennessee State University in 1970 with a Bachelor’s of Education. He went on to be one of the largest advocates in the teaching community. He served students for 38 years until retirement and then continued interim positions for several years after that. He was awarded teacher of the year at Colonial Heights Middle School and Who’s Who Among America’s Teachers. He received both of those awards in 1992. Outside the classroom, he led the Math Counts/ Math Bowl from 1983-2002 at CHMS. During those years, he led them to two National Championships in Washington DC. Mr. Hutson extended his reach beyond the classroom by coaching several sports throughout the years 1980-2002. He also umpired for 45 plus years with the TSSAA. Coach Hutson’s legacy will live on in the thousands of lives he touched in the classroom, on the court, and in his everyday life.

Clay Hutson is preceded in death by his parents Irvin and Mary Hutson.

Celebration of Life will be held at Sullivan Heights Middle School, formerly known as Sullivan South High. The famiy will be receiving of friends will be Saturday 15th from 10:00 – 12:00 with the service immediately following. Burial will be held after services at Highland Cemetery in Rogersville, TN. Gary Gerhart, retired pastor of First Baptist Church, Church Hill will be officiating. The family would like to thank all of the nurses, doctors, and staff at Holston Valley Medical and Indian Path Hospital. A special thanks to Donna Marshall at Indian Path Hospital. For the safety of all, the family request you please wear a mask. Please celebrate with us by wearing your orange and white!